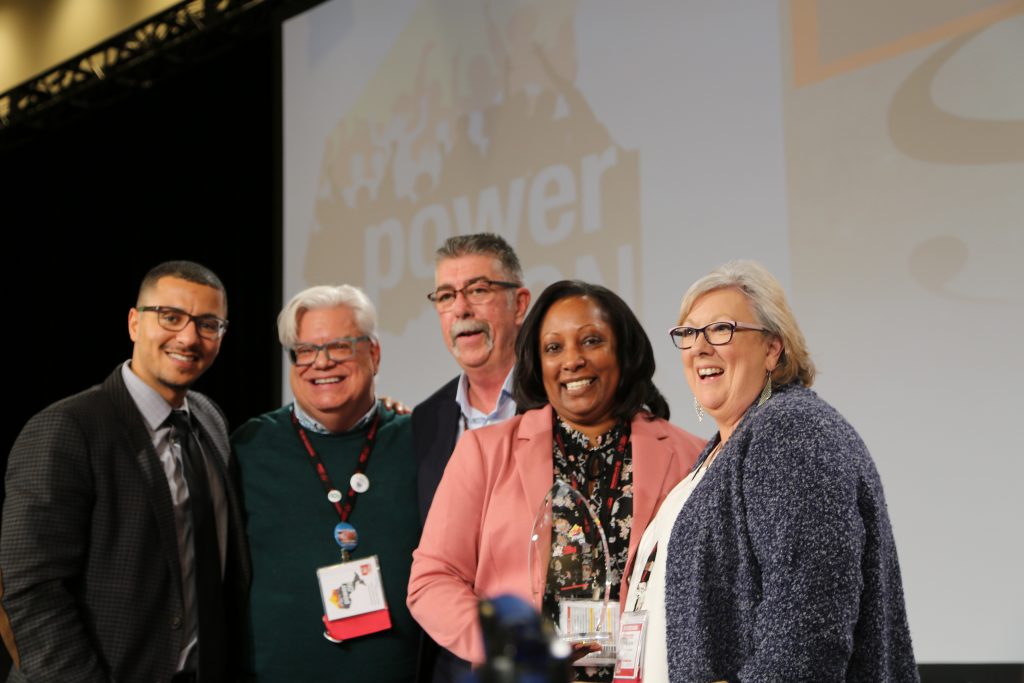 At the 14th biennial OFL convention in Toronto, Yolanda McClean of CUPE Local 4400 and CUPE Ontario, was presented with the Cliff Pilkey Labour Activist Award.

The award recognizes the outstanding contributions of a worker or retiree who has made a significant impact on the labour movement and community.

Clifford George (Cliff) Pilkey was a life-long trade union activist and the third President of the Ontario Federation of Labour.  Under Cliff’s leadership at the OFL, Ontario workers made many incredible legislative advancements, including equal pay for work of equal value, dues check-off, expedited arbitration and a ban on professional strike-breaking.  Read more on the award here.

McClean serves as the Second Vice President of CUPE Ontario, a senior leadership position she has held for almost a decade. Prior to holding this office, McClean served as the Diversity Vice-President for Racialized Workers in Ontario. She was just re-elected as CUPE National’s Diversity Vice-President, representing Racialized Workers, a position she has the honour of holding for the longest period in CUPE Ontario’s history, for more than a decade.

In nominating McClean, Fred Hahn, CUPE Ontario President and Candace Rennick CUPE Ontario Secretary-Treasurer, said that, “Sister McClean has successfully done this work not just in her local – with her local school board and city council, but provincially, nationally and internationally.”

In accepting this award, McClean said that, “The fight for representation is truly the most important fight,” and reminded delegates that taking real action and having a diversity of voices at leadership tables is vital.

As the President of the Coalition of Black Trade Unionists (CBTU) – Canada Chapter, McClean is elected by workers from all affiliates to represent the interests of black workers through the CBTU.

In closing, McClean said to delegates, “We are leaders because we work collectively and we inspire each other. Because we share a vision of a beautiful and fair world for all. Let’s continue to build up leadership for all workers. I know that we can and I know that we will win!”