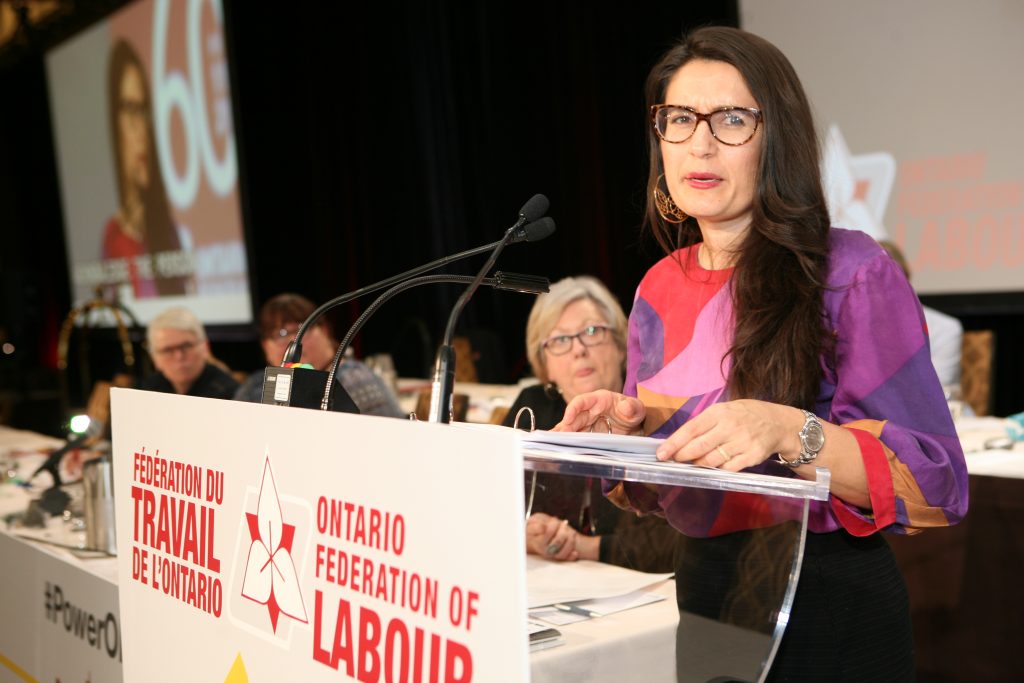 Farrah Khan says she wants her job eliminated. It was an odd statement to hear, until she talked about why. As a long-time advocate and the current Co-Chair of Ontario’s Roundtable on Violence Against Women, Khan told delegates at the OFL convention that it’s sadly not likely to happen.

“Equity, consent culture, the end of violence against women, or of gender-based violence ending, is science fiction right now,” she said.

But Khan added that the labour movement has had a very positive impact for many women, who have and continue to benefit, from each new campaign that supports fairness and equity for all.

“Labour has lately had two huge wins that I want to name for advancing women’s empowerment,” she said. “I want to name the 15 for Fairness that means we have $15 minimum wage that is coming to Ontario and that will change the lives of everyone.”

Khan explained that economic equity means that women won’t be forced to stay in the homes of abusers if they can  afford to leave.

“I can tell you that as a survivor, I lived with domestic abuse,” she shared. “If I had known that I could have taken that time off and not be penalized, what a change that would have been.

“This allows us to give breathing space to survivors.”

Ontario’s unions, can continue to support survivors of sexual violence and harassment by looking to remove barriers to reporting and to empowering women to walk away from abusive relationships. Instead of asking survivors why they didn’t report, for instance, “a better question is: what are the conditions in our workplaces that make it so hard for people to say that something happened to them.”

Beyond training, it’s about the “in-between conversations” that are needed in all spaces.

“How do we envision a world that is free of violence? Is it talking to each other?” asked Khan.

Khan shared that the question of ‘what next?’ must be about ‘how we heal’, which includes understanding what and who may cause harm in our lives and how to move towards transformative change. Including abusers in the conversation is painful, but crucial.

“I want to live in a world without violence,” she concluded. All of us, she said, still have much work to do.