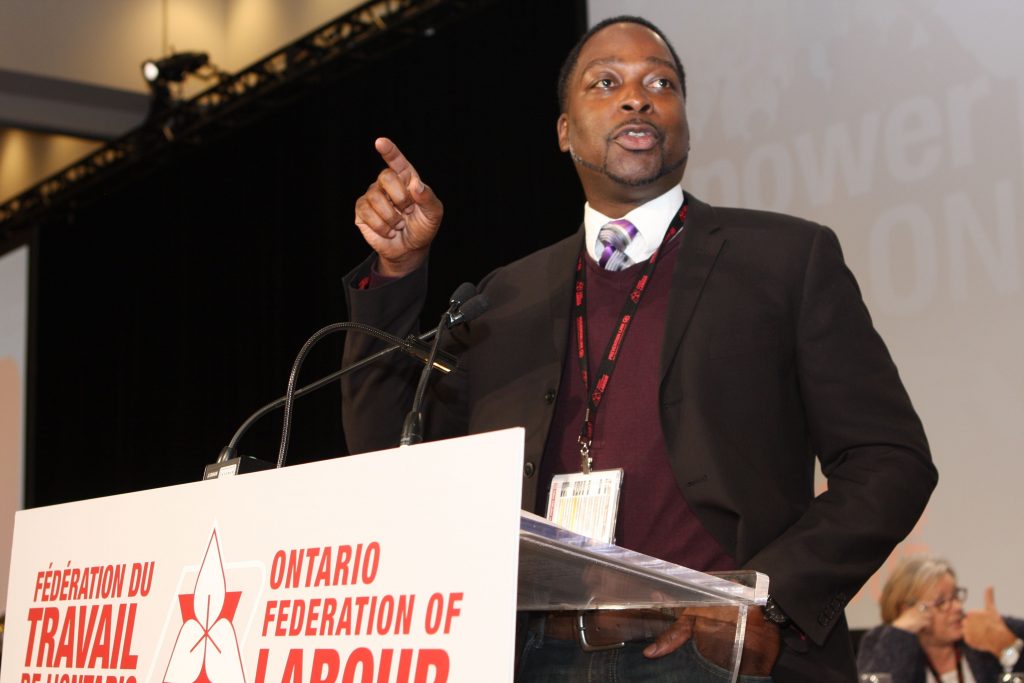 If there was one central message from Thursday afternoon it was this: democracy takes work.

Following a long debate and eventual vote on resolutions in the Action Plan, delegates at the Power ON 2017 OFL convention heard from several skilled and experienced leaders on how they support civic engagement among their members and communities.

Chris Watson, a national representative from CUPE, told the convention that last spring, with a provincial by-election approaching, people were wondering how new election finance laws would impact on their campaigns to support a party of their choice.

After some research, they came to understand that they wouldn’t be able to simply write a cheque to support a party or candidate as they had done previously. They also faced “severe restrictions” when it came to speaking to the general public as a 3rd party through paid ads. Yet, what they discovered was they could speak internally within CUPE to “say whatever we want and spend as much as we wish to do so.”

They developed the “Soo” Model out of the new paradigm. They reached out heavily to their own members to engage on the key messages they

wanted to present to them – and to encourage members to present to their own families, friends, and colleagues. Using postcards, meetings, and canvassing, the model was successful, and could be useful for the upcoming 2018 provincial election, said Watson.

That person-to-person contact is key, said Nuvi Sidhu, Campaigns Field Director for the NDP. “When people are invested in the issues, they want to speak to others,” she explained, citing the way the party deliberately set out to nurture leadership among their volunteers. With a systematic approach that included 73 organizers, two campaign offices, 3,259 volunteers, and 1147 “Growth Captains”, the campaign for Jagmeet Singh’s leadership bid made history by signed up 47 thousand new members within a short span of time.

“We were building up capacity and making a community,” said Sidhu.

Building leaders is key, said Tyler Downey, Director of Member Engagement at SEIU Healthcare. “Engagement is not an event. It is a continuing evolving process,” he added.

He described building a leadership academy that provides education and connection. Over one four day period, they were able to organize members

to knock on four thousand doors and talk to people about key issues. It was an opportunity for members to recognize their own potential in raising awareness and in helping to bring about positive change.

Without full inclusion of the diverse membership, said Downey, these types of efforts will fail. “We must grow organically through inclusion. We are leaving a lot of people behind.”

Moderator Melisa Bayon, OFL Director for Political Action and Outreach, concluded the panel by reminding delegates the value of civic engagement by recalling her home country of Argentina which went through upheaval as its people struggled to restore their democracy years ago.

“We hope to build a movement with you,” she said.