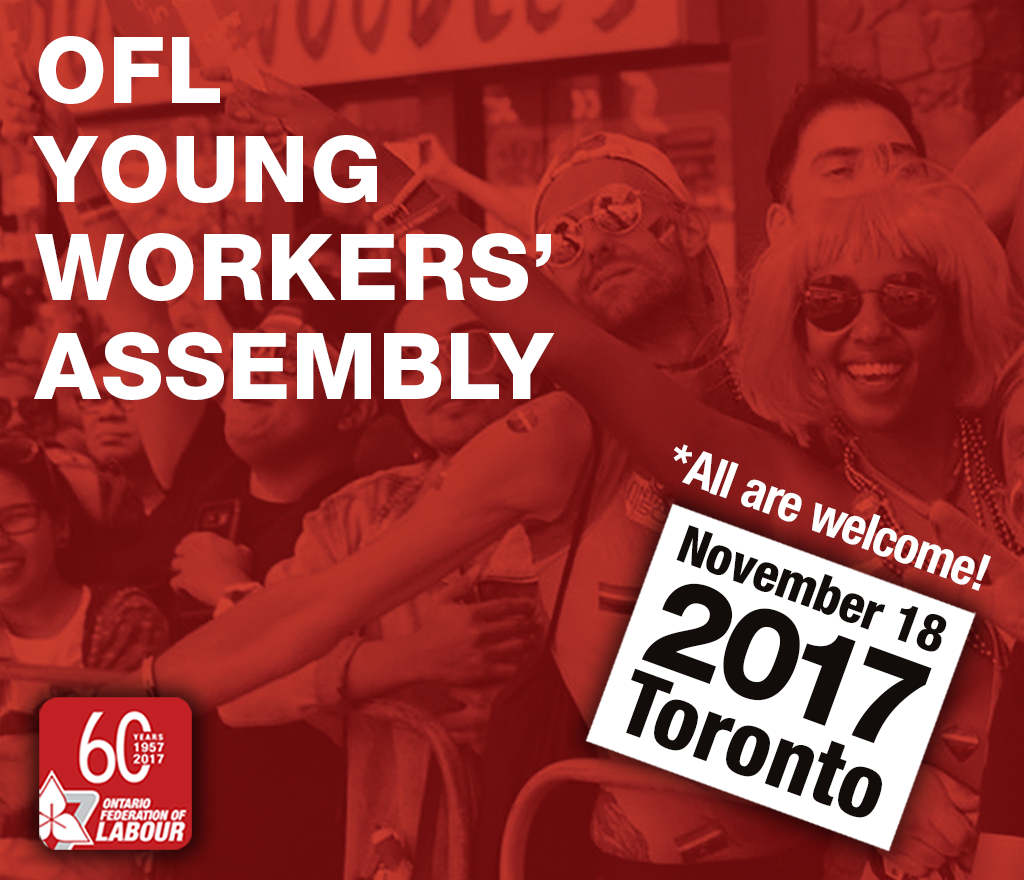 Over 100 workers from across Ontario attended the OFL Young Workers’ Assembly at the Sheraton Centre Toronto on November 18. Ontario Federation of Labour President Chris Buckley, opened the day with an inspiring welcome to the group.

“Each and every one of you deserves decent work and a good job,” said Buckley. “And I want to thank you all for your activism and for making this the Ontario you want.”

“This is absolutely fantastic, all of your voices coming together, representing so many different communities,” said Ontario Federation of Labour Secretary-Treasurer Patty Coates. “We will continue to work together to ensure that the government addresses the issues facing young workers in Ontario.”

“We have governments in this country who are telling young people that they should simply accept precarious work, but we won’t accept that. You deserve better,” added Ontario Federation of Labour Executive Vice-President, Ahmad Gaied.

The day’s first panel discussed the Fight for $15 & Fairness and Make It Fair campaigns. Panelists highlighted the importance of organizing around issues like a higher minimum wage, and the power of workers rallying around a common goal.

Panelist Rajean Hollett, Fight for $15 & Fairness, said it was important to set goals that were “lofty enough to be energizing, but realistic enough to be achievable.”

When asked what it means to be an effective ally, panelist Sarah Jama, Community Engagement Liaison to Councillor Matthew Green, said: “An effective ally is proactive in building a long-term movement by helping to mentor young activists.”

Hamilton City Councillor Matthew Green encouraged labour activists to work to support not just union members, but to seek justice and fairness for all.

In addition to the great lineup of speakers and panelists, attendees participated in a variety of skills-building workshops and discussions offered throughout the day.