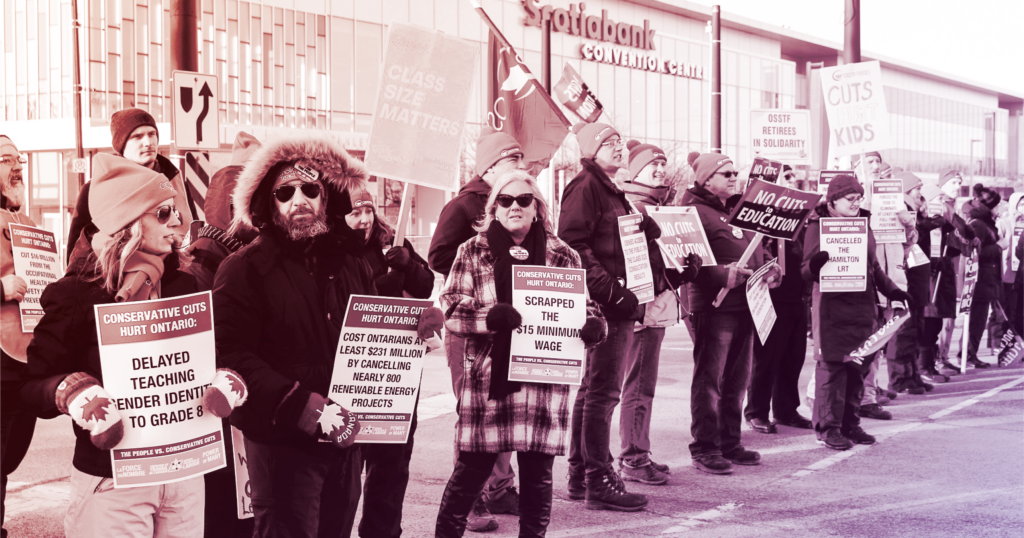 TORONTO – Today, Doug Ford backtracked on his government’s 2018 decision to cancel the $15 minimum wage, that cost workers dearly over the past three years. The Ontario Federation of Labour is calling today’s announcement proof that the longstanding demands of the labour movement remain the best way to build a better province for all.

“Three years ago, workers fought for and won a $15 minimum wage because we knew then that a livable wage was urgently needed,” said Patty Coates, Ontario Federation of Labour President. “Immediately upon taking office, Doug Ford scrapped the minimum wage increase. We knew it would hurt workers and it would hurt the economy. We were right.”

This is not the first time that Ontarians would have benefitted from a swifter response to workers’ demands. At the height of the pandemic workers urged the Ford Conservatives to implement permanent, adequate, employer-paid sick days. Ford’s government dragged their feet for months before finally backtracking to implement what the Ontario Federation of Labour has called an ‘insufficient, temporary paid sick days program’.

“Doug Ford’s stubborn refusal to act in the best interest of workers’ came at a hefty cost,” said Coates. “While the Conservatives waited to change course on issues like paid sick days and the minimum wage, Ontarians fell ill, and were left languishing on poverty wages for far too long.”

Before the Conservatives scrapped it, the minimum wage was set to go up to $15 in 2019 and increase at the rate of inflation thereafter. Workers have lost out on thousands of dollars that they would have made if Doug Ford heeded the calls of the working people of Ontario earlier.

“Ontario has fallen behind because of Doug Ford. Despite being Canada’s economic engine, Ford’s poor decisions have stalled our province”, Coates added.

“British Columbia, Alberta, the Yukon and the Northwest Territories all have a minimum wage of $15 or higher,” Coates continued. “Not to mention Ontario’s public sector workers, many of whom worked the frontlines of the COVID-19 pandemic, are still facing a wage cap, as a result of Bill 124.”

This week, as workers from across the province meet at the Ontario Federation of Labour’s 16th Biennial Convention, they will set a workers’ first agenda, defining their future and the fight ahead.

“Workers have proven they know what is needed to make this province better for everyone. We were right to fight for $15 when we did, and we’ll be right as we continue to fight for workers into the next election. It’s time for a government that listens and acts swiftly on our demands,” said Coates.