October 28, Ontarians will meet the Conservatives’ return to Queen’s Park with a Day of Action to win an Ontario for all | The Ontario Federation of Labour

October 28, Ontarians will meet the Conservatives’ return to Queen’s Park with a Day of Action to win an Ontario for all 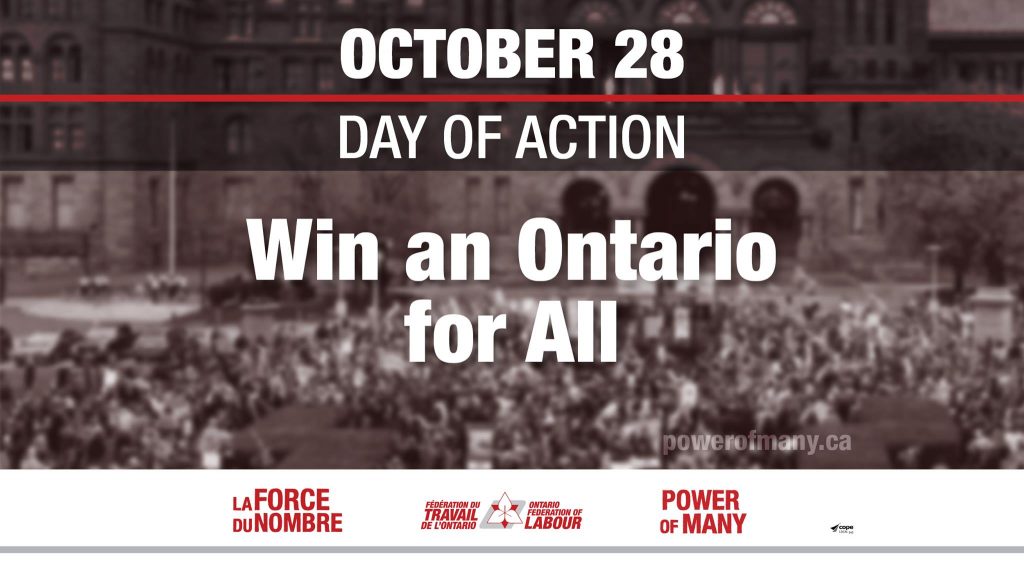 (TORONTO, ON) – Labour and community groups are welcoming MPPs back to Queen’s Park by demanding the Conservatives create an Ontario for all, not just the rich, says the Ontario Federation of Labour (OFL).

Community champions will surround Queen’s Park circle to voice their demand that MPPs change the agenda, stop hurting families and communities with cuts to public services and instead build an Ontario for all.

“Ford and his MPPs have been in hiding for five months, but Ontarians have not forgotten the damage they have done. We are still here resisting the cuts that hurt Ontario communities,” said Ontario Federation of Labour President Chris Buckley.

“We are sending a message to Ford: we’re not going away. We have the Power of Many on our side and we’re demanding better from this government. We won’t rest until every person in Ontario has decent work, strong communities and access to the well-funded publicly delivered services they rely on,” said Buckley.

Three-quarters of Ontarians do not support the Conservative government. Conservative cuts and changes continue to cause hardship for Ontario workers.

Reduced funding to schools has meant layoffs for education workers, meaning, among other things, 50,000 fewer courses for students. Cuts to post-secondary funding have forced some students to drop out of universities and colleges. Cuts to public health hurt Ontarians, and under the Conservative government’s changes to health care, more people are forced to endure hallway medicine. On October 16, the Premier refused to take action to improve health and safety for temp agency workers, opting instead to arrest eight peaceful protestors who were demanding he enact an already-passed piece of legislation.

The Conservatives have proposed to limit compensation increases for public sector workers in every sector including: health care, long-term care, all levels of education, social services, municipal services and more.While proposing a limit at a rate far below the annual rate of inflation, the government has given its Deputy Ministers a 14 per cent raise.

Monday, October 28, workers and communities are coming together to demand that the government fully fund public services like health care, education and child care, act to improve health and safety in all workplaces and for all workers in the province. Stop cancelling services for Ontario’s most vulnerable, respect collective bargaining rights, and start to take meaningful action on the climate emergency.

Actions on October 28 will include:

Place: Queen’s Park media studio
Speakers: Ontario Federation of Labour President Chris Buckley will speak. A post-press conference scrum will be held where media can speak with Ontario’s labour leaders, students, and workers who have been laid off despite Ford’s promises that “not one job” would be lost.