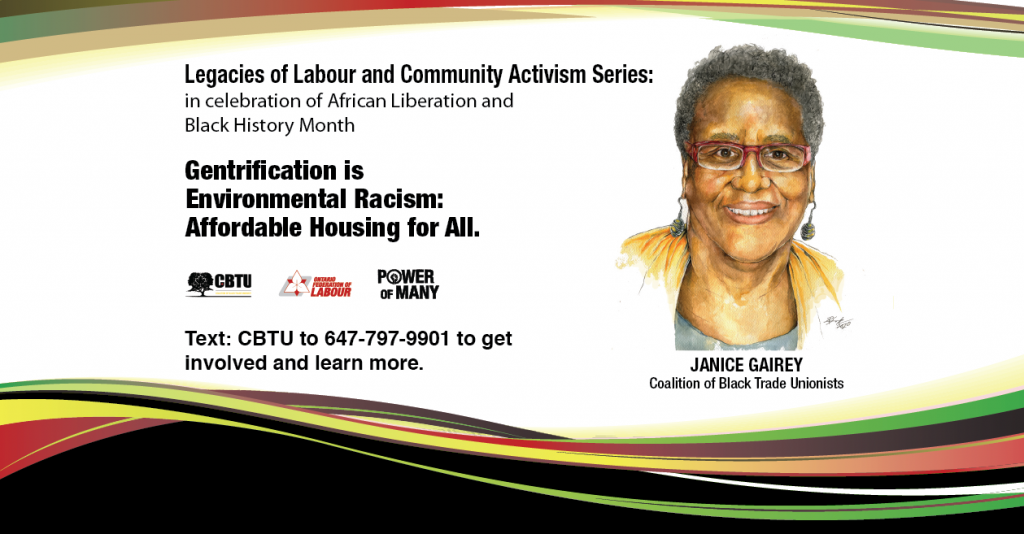 The Coalition of Black Trade Unionists Canada and the Ontario Federation of Labour are celebrating African Liberation and Black History Month by launching our second annual Legacies of Labour and Community Activism poster series.

Generations of justice activists like Janice Gairey are recognized for their unwavering commitment to end anti-Black racism, Islamophobia, and racial inequality in all its forms.

The struggle to end racist policies continues today. Housing costs continue to rise while wages remain stagnant and decline under the Ford government. Barriers to affordable housing are compounded for racialized workers who earn far less than white workers: the income gap is getting wider. Racialized communities are being displaced as urban centers become segregated under a system referred to by Professor Grace-Edward Galabuzi as “Canada’s economic apartheid.”

The OFL and CBTU join the calls of MP Matthew Green and MPP Rima Berns-McGown to declare homelessness a state of emergency. The private sector can’t be relied upon to secure affordable housing for all. Governments must invest now: access to affordable housing should not be dependent upon the colour of your skin.

This year’s poster in the Legacies of Labour and Community Activism series honours Janice Gairey.

A very humble leader, Janice Gairey often avoided the limelight. However, on the occasion of her receipt of the Toronto and York Region Labour Council’s Bromley Armstrong Human Rights Award in 2012, Janice was asked to deliver some remarks from the podium. Her words spoke volumes about her leadership and added further justification for her receipt of the award. She said, “At this stage of my life, I am doing this work for my grandchildren and for my community and no one in any position of power or privilege is going to stop me.”

With a long family history of civil rights activism dating back to her great-great-grandfather’s escape from slavery through the Underground Railroad, Janice’s activism is in her blood. Her history is entrenched in working with communities of colour and comes from her father, the late Desmond Davis, who was a pivotal member of the Black Sleeping Car Porters together with Stan Grizzle and the late Harry Gairey. She has been a social justice advocate for more than fifty years, with a primary focus on combating racism in Canada.

Gairey started her career at the William J. McCordic School in Toronto, as an educational assistant, helping students with developmental delays. She quickly moved up the ranks in her union, and became Vice-President of CUPE 1874. Janice moved on to work as a Project Coordinator for the Toronto and York Region Labour Council, before settling into her first position with the Ontario Federation of Labour, as a Regional Coordinator of the Basic Education for Skills Training (BEST) program. After funding for the workplace literacy program was cancelled by Premier Mike Harris in the mid-1990s,  Janice worked her way through a series of positions in a variety of unions, including SEIU, CUPE, HERE, ACTWU and the Toronto and York Region Labour Council’s Labour-Community Services, before she returned to the OFL in 2003, as the Education Director.

In 2007, Janice became the OFL’s Human Rights Director after June Veecock retired, and, like Veecock, Janice amplified the OFL’s human rights work through her work with the CBTU. As the longest-serving President of the CBTU’s Ontario Chapter, Janice earned a reputation within the CBTU International for bringing the largest delegations in the Chapter’s history and for bringing forward some of the hardest-hitting resolutions.

However, Janice’s equity activism reached far beyond her own community. Under her leadership, the CBTU formed a formal alliance with the Latin American Trade Unionists Coalition (LATUC) and the Asian Canadian Labour Alliance (ACLA). She also became a champion of Indigenouse issues and worked closely with First Nations, Inuit and Métis communities.

Janice continues her work today, promoting racial equality and challenging oppression. She works with the African Canadian Legal Clinic and Black Lives Matter-Toronto on racial profiling and “carding” in Toronto. She also continues to support Black workers in her role as the Ontario Chapter President Emeritus of the Coalition of Black Trade Unionists (CBTU), along with her new position on the Executive of the Congress of Union Retirees of Canada (CURC), which guarantees that Janice’s labour activism is far from over. She recognizes that racialized youth of today will play a significant role in the fight to end racial discrimination.

As a proud mother of six and grandmother of 18, family is an important focal point to Janice’s activism and it is the essence of “people first” leadership style. She devoted her attention to developing other activists and supporting them to become the next generation of leaders.