Ending Racism is a Collective Obligation

Across Canada, the month of February is recognized as Black History Month and the social, cultural and economic contributions of Black people and people of African and Caribbean descent are celebrated. However, the OFL believes that it must also be a time to reinforce the collective resolve of Canadian workers to be active and present in progressive movements to challenge racial discrimination, end systemic racism and dismantle the barriers preventing the full and equal participation of all racialized people.

This year, Black History Month celebrations are set against the backdrop of the Black Lives Matter campaign that has swept across North America in response to racial profiling, racially motivated “carding” and police shootings of Black men. While the spirit of Black Lives Matter is resistance to the de-humanization implicit in anti-Black racism, the movement is also one of empowerment, engagement and emancipation.

It is in this spirit that the Ontario Federation of Labour (OFL) celebrates Black History Month this year.

The OFL has joined the Ontario NDP in calling on the Government of Ontario to finally take action on the 2006 Human Rights Code Amendment Act, by re-establishing and properly funding, a provincial Anti-Racism Secretariat.

“Ontario has an incredible heritage of Black activism that has challenged racism, prejudice and discrimination, but this is not the responsibility of the Black community – or any other racialized group in our society – to fight these battles alone,” said OFL President Chris Buckley. “By re-establishing the Anti-Racism Secretariat that was dismantled by the Mike Harris Government, Ontario has an opportunity to make the advancement of racial justice a prerequisite throughout the province.”

The OFL is also calling attention to the stark reality that is faced by Black Canadians who:

For Black women, Black people with disabilities and Black people from the Queer and Trans community, the barriers are even greater.

“Challenging racism is about much more than speaking out against prejudice and discrimination when we witness it, it is about confronting systemic racism with concrete government action to remove the barriers to equal opportunity,” said Ahmad Gaied, OFL Executive Vice-President. “The OFL is calling on the Government of Ontario to broaden it’s understanding of pay equity beyond the gender wage gap and make employment equity, in all its forms, a priority for all employers and for every level of government.”

February has been celebrated as Black History Month for a century, but the Canadian government only gave it formal recognition 20 years ago this year.

Among the many Black community activists who will be celebrated and remembered by the labour movement this month are Ontario’s Zanana Akande, June Veecock, Janice Gairey, Fred Upshaw, Rosemary Brown, Dudley Laws and Charles Roach.

“Ending racism is a collective obligation,” said Gaied. “The Government of Ontario and people of all races have an obligation to honour the incredible legacy of Black history by continuing the fight for racial justice, human rights and an end to inequality.”

The Ontario Federation of Labour (OFL) is encouraging all workers and community members to join Black History Month celebrations across the province. 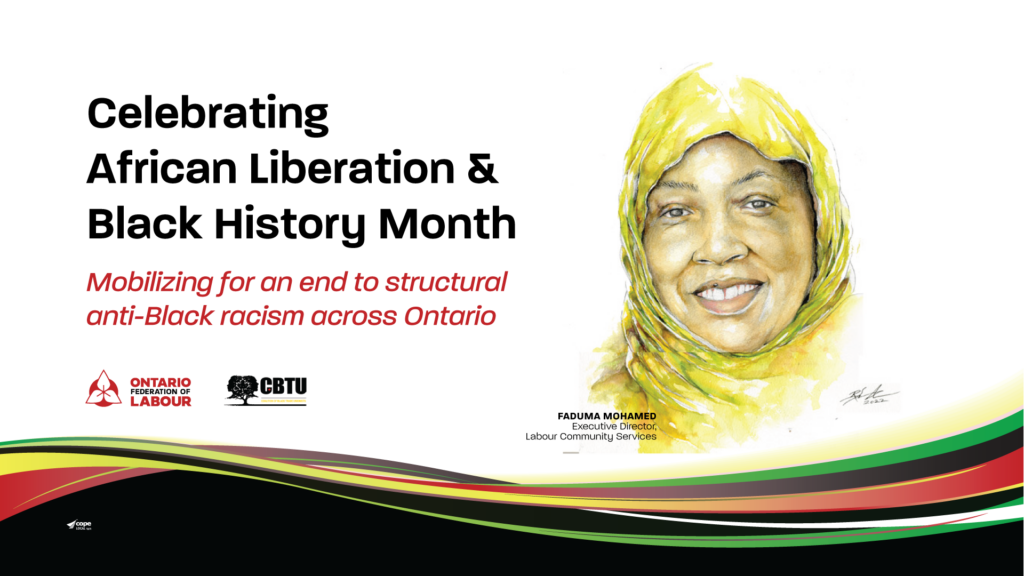 Mobilizing for an end to structural anti-Black racism across Ontario The Coalition of Black Trade...
Read More

OFL statement on revelations of racist actions by the Prime Minister

The Ontario Federation of Labour condemns the racist actions by Justin Trudeau that have been...
Read More