As millions of women around the world observe International Women’s Day, the Ontario Federation of Labour will proudly celebrate the role that unions have played in elevating the living standards of all women in Canada. The history of union achievements in Ontario has been one of establishing basic and fundamental rights for all people, but here is no question that women workers have gained the most. However, austerity cuts to public services and anti-worker legislation currently being championed Conservatives at every level of government today pose a threat to many of the gains that women have made and could role back standards for all workers.

“Rising inequality is having a devastating effect on Ontario families, but there is no doubt that austerity cuts are hitting women the hardest hit,” said OFL President Sid Ryan. “The highest rate of unionization among women workers is in the public sector, where they typically earn 10 percent more than their private sector counterparts. When those services are cut, it affects women disproportionately because women are the majority of public sector workers and are often the primary users of public services.”

Women workers who do not belong to a union are eight times more likely to earn poverty wages and are half as likely to have a workplace pension. However, regardless of union membership, all Canadian women have benefited from the achievements of unions. Laws guaranteeing the minimum wage, pay equity, maternity leave and harassment free workplaces were all secured because of the work of trade unions.

However, despite these gains, inequality is still most acutely felt by women and their dependents. Among those with full-time employment, women workers continue to take home only $0.70 for every dollar earned by men and racialized women earn only $0.60 compared to non-racialized men and 16 percent less than racialized men. Women continue to find themselves among the poorest of the poor, especially women raising children in single-parent families, who are almost five times more likely to be poor than those in two-parent families. This gender gap nearly triples for older women who are living on their own and is magnified among women in all of the most vulnerable populations: Aboriginal people, people from racialized communities, recent immigrants, persons with disabilities and so many others. As one report puts it, “Gender creates a cleavage of vulnerability that cuts across all other groups.”

“The massive job loss of the 2008 recession hit the North America’s male-dominated manufacturing sector the hardest, but the austerity job cuts of this decade will deliver the most devastating blows to women and other equity seeking groups,” said OFL Secretary-Treasurer Nancy Hutchison. “Ontario needs a ‘people’s budget’ that puts equity and fairness at the centre of an economic recovery that benefits everyone.”

Each year, International Women’s Day (IWD) is celebrated around the world on March 8 to recognize the economic, political and social achievements of women. The day marks the anniversary of the 15,000 women garment workers who marched in 1908 to demand shorter working hours, an end to child labour, safe working conditions and equal pay. Their slogan – “Bread & Roses” – rang through the streets. Bread symbolized economic security and roses symbolized social justice and a better life.

For over a century, women have sought to unionize their workplaces as a vehicle to pull themselves out of low wage conditions, secure decent benefits and improve their standard of living. Now these basic and democratic rights are being threatened by Canadian Conservative politicians who are championing American-style laws that would destroy collective bargaining. The Ontario Federation of Labour has launched a People’s Budget campaign to travel the province throughout the month of March soliciting recommendations from Ontarians in every community on how to make the provincial budget fair for everyone. Submissions are also being received online at www.thePeoplesBudget.ca and will be compiled into a report presented to Ontario’s new Premier – the first woman to ever hold this post – Kathleen Wynne. However, the OFL has also released two new reports, The Rising of Us All and Working for Less, that documents the gains that unions have made and highlighting that vital role that unions play in elevating women and other equity seeking groups. Both reports are meant to challenge Conservative anti-union rhetoric and are available at: www.OFL.ca/index.php/Campaigns/WorkersRights

“Now is not the time to take women’s progress over the last century for granted. This year, women workers across Ontario are reflecting on the generations of our mothers and grandmothers who fought hard to achieve equality and human rights,” said Hutchison. “At International Women’s Day events across the province this year, women will be redoubling our efforts to challenge austerity and the anti-union agenda that puts corporate greed ahead of human needs.” 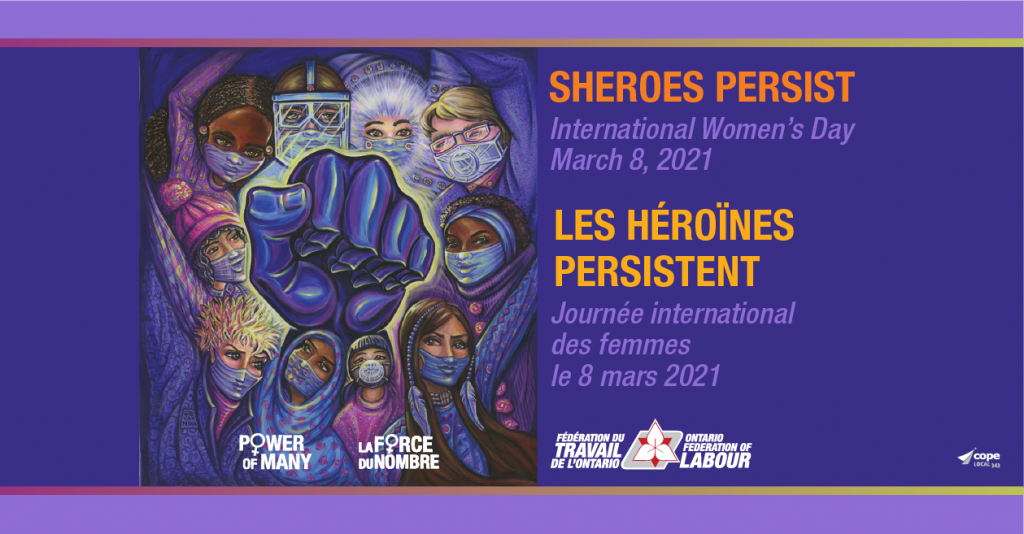 Greetings: For more than a decade, the OFL’s March 8 Project has been supporting women’s...
Read More

Greetings Sisters & Brothers: I am writing to invite your union to participate in the...
Read More