Defund the Police FAQ | The Ontario Federation of Labour 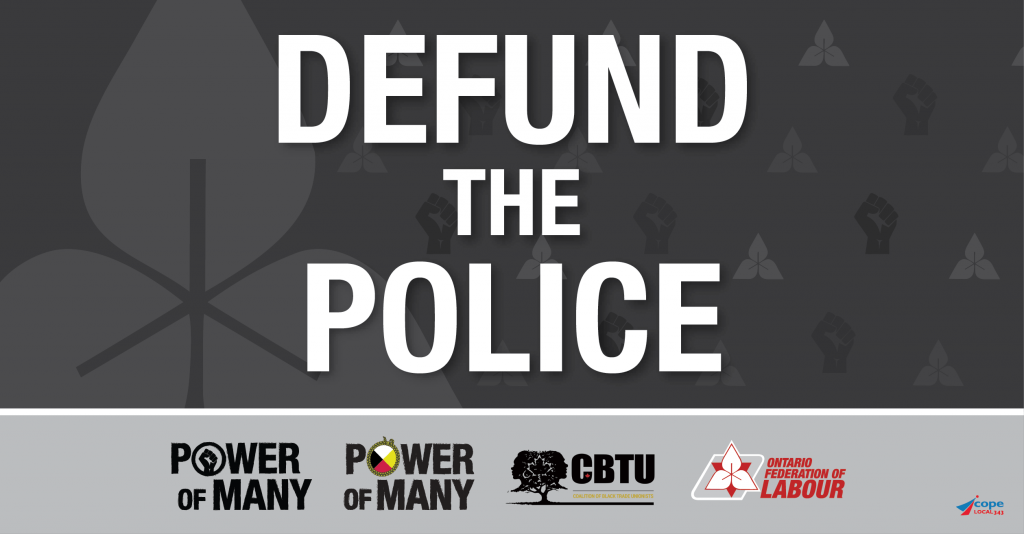 WHAT IS ANTI-BLACK AND ANTI-INDIGENOUS RACISM?

Anti-Black and anti-Indigenous racism is an implicit and/or explicit bias, on an individual and institutional level, directed at Black people and members of Canada’s First Nations, Métis, and Inuit communities.

It has historically and presently resulted in public policies and practices – including policing, educational, health care, labour market, environmental and judicial – that reinforce and perpetuate discriminatory beliefs, attitudes, and prejudices towards Black and Indigenous people.

The Toronto Board of Health recently declared anti-Black racism a public health crisis.

WHY IS ANTI-BLACK AND ANTI-INDIGENOUS RACISM SUDDENLY IN THE SPOTLIGHT?

Senseless violence and brutality against Black and Indigenous people at the hands of police have long existed across Turtle Island. As a result of these atrocities, systemic racism has become normalized, but it should have been in the spotlight long before now.

Sadly, the recent surge of killings of Black, Indigenous, and racialized people – including the nine police-involved killings witnessed by Canadians since April 2020 – has brought many members of society to their breaking point. In New Brunswick, for instance, Chantel Moore, an Indigenous Canadian woman, was killed by police during a wellness check.

South of Canada’s borders, Eric Garner and George Floyd, both Black men, took their last breaths prematurely at the hands of police violence, and Breonna Taylor, a 26-year-old was killed by police while sleeping in her bed.

The reality is that communities have been speaking out about anti-Black and anti-Indigenous racism for years, including the police-involved deaths of Canadians such as Regis Korchinski-Paquet, D’Andre Campbell, Andrew Loku and others.

Across multiple cities around the globe, people have taken to the streets and held rallies in support of the Black community to denounce racism, to proclaim that Black Lives Matter.

WHY ARE WE NOT ADVOCATING FOR ALL LIVES MATTER?

Anti-Black and anti-Indigenous racism is deeply entrenched and normalized in many Ontario institutions and communities. This is demonstrated in the many social, economic and political inequalities Black and Indigenous people experience every day.

We have and will always continue to advocate that all lives matter. However, all lives can’t matter if Black and Indigenous lives don’t matter.

The current policing construct has left the Black community with the belief that there will be little or no consequences for the taking of or severe injury to Black life. Unfortunately, the same is true for Indigenous lives.

WHAT IS THE OFL AND CBTU’S RECOMMENDED APPROACH TO ELIMINATING ANTI-BLACK AND ANTI-INDIGENOUS RACISM?

The OFL and CBTU have long recognized that anti-Black and anti-Indigenous racism is deadly. Previous calls to publicly reform oppressive institutions, including police services, have not worked. Eliminating systemic racism is multifaceted as it reaches into all aspects of society, but part of that strategy must include reimagining what public safety and well-being can and should look like.

Specific demands for change will look different from city to city, depending on the needs of the community. However, as a collective, the labour movement understands that fundamental and disruptive change is required: defund the police.

WHAT IS WRONG WITH THE CURRENT POLICE SERVICES?

Like other institutions, policing services across North America are entrenched in anti-Black and anti-Indigenous racism. In fact, police services were established in Canada in the mid 1600s to aid in the colonization of the Indigenous people – primarily based on the policing systems of the British and French watchman system. By the 1700s, slave patrols were introduced into their list of duties. The North West Mounted Police (now called the RCMP) was established in 1873 and adopted a more military approach to policing, particularly in their brutal treatment of the Indigenous people. The history of Canadian policing services has been clearly documented; it has always been to protect the settlers and ensure their property was overseen.

Nowadays, police practices across the province are highly militant, combative – employing a violent rather than a reconciliatory approach – particularly towards Black and Indigenous people. Years of combative and belligerent tactics have led to the racial profiling, as well as the brutality and killing of people of Black-African descent and members of the First Nations, Métis, and Inuit communities.

ARE WE CALLING FOR ONTARIO COMMUNITIES TO MOVE FORWARD WITHOUT THE POLICE?

As a collective, the labour movement understands that fundamental and disruptive change is required. There are significant steps that can and need to first be taken to end the systemic oppression of Black and Indigenous people that has been normalized for far too long. We need to disrupt the system by first defunding the police.

WHAT DOES DEFUND THE POLICE MEAN?

Defund the police is the collective cry heard from around the world. These words mean different things to different people.

To some, those words mean eliminating the police budget and completely reconceptualizing public safety. To others, those words are interpreted as reducing police budgets and reallocating those funds to public services within the community.

While the spectrum is far ranging, we can all agree that the current system is not working for everyone.

WHAT DOES THE #DEFUNDTHEPOLICE MOVEMENT MEAN FOR ONTARIO?

The #DefundThePolice movement is rooted in fighting for freedom, liberation, justice, and protection for Black and Indigenous lives. The movement calls for reducing overfunded police budgets and reallocating funds towards alternate, more effective methods of providing our communities with safety and security. Rather than continue to use the “traditional” approach of requiring the police to perform a myriad of tasks, the demands of #DefundThePolice movement include:

WHERE CAN THIS MONEY BE SPENT?

We should be reallocating these funds towards publicly delivered health service, non-police, and community-based service interventions. These reallocations and changes to the policing construct can only succeed if the end solutions are geared towards fighting against systemic racism and servicing the community, placing value on all Black and Indigenous people to not only survive but to succeed in society.

This can include boosting public investments in:

HOW MUCH MONEY IS SPENT ON POLICE BUDGETS?

A significant amount of public monies are currently allocated to funding the police. Imagine what our public services in our communities could look like if we reallocated some of that money.

HAVE OTHER APPROACHES BEEN EXPLORED, ASIDE FROM DEFUNDING THE POLICE?

Yes. Various Canadian jurisdictions have tried reform, including increased training, and introducing body cameras meant to hold police accountable. None of these measures have worked; the police continue to kill Black and Indigenous people, often without ever having to be held accountable.

It is unclear whether renewed calls for reform will render new results, and the reality is that the police are not trained or equipped to be mental health professionals, social workers, medical professionals, or education workers.

We demand investment in our communities and the resources to ensure Black and Indigenous people not only survive but thrive. We join the national call to defund the police.

HOW CAN I HELP/WHAT CAN I DO?

Everyone has a role to play in combating anti-Black and anti-Indigenous racism in their respective communities, and collectively across Ontario. You can:

What are some other resources?