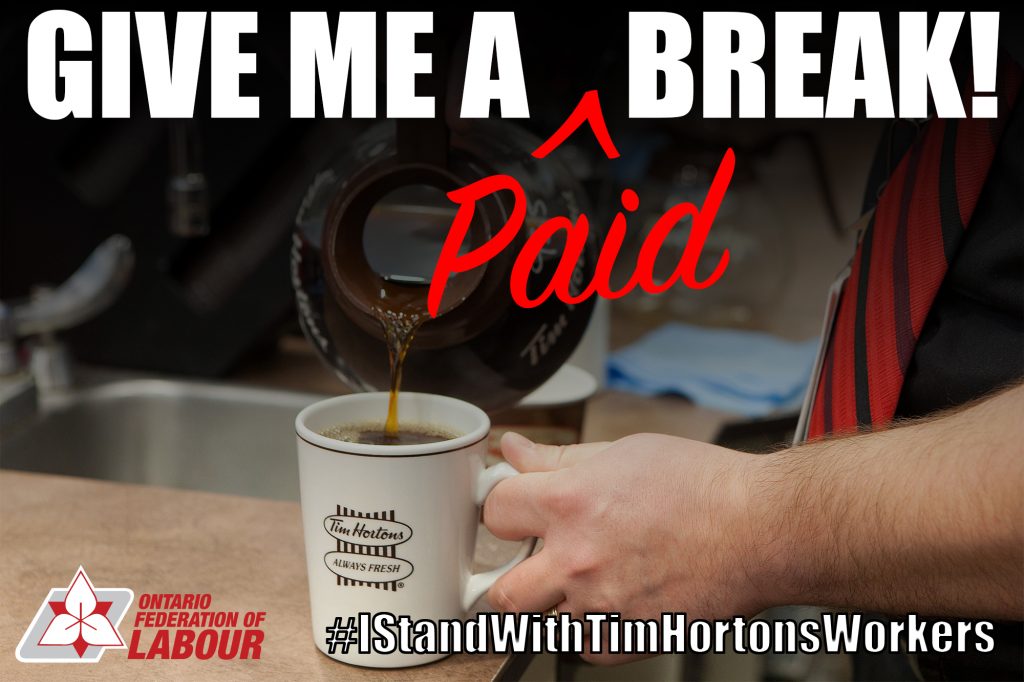 (Toronto, ON) – The Ontario Federation of Labour is demanding action from the parent company of Tim Hortons, on behalf of Tim Hortons workers in an open letter to Restaurant Brands International (RBI) Inc. CEO Daniel Schwartz. The text of the open letter follows:

RE: Take Immediate Action to Restore Wages and Benefits to all Tim Hortons Workers

I write today to formally request that as Chief Executive Officer of Restaurant Brands International (RBI) Inc.– the parent company of Tim Hortons, you take the immediate steps required to ensure that Tim Hortons franchise owners respect the spirit of, as well as comply with, labour laws in Ontario.

It is our view that this can only occur with the full restoration of wages, paid breaks and benefits to the workers at Tim Hortons restaurants across your entire chain.

The Ontario Federation of Labour represents one million workers in Ontario, and we advocate for improved and fair working conditions on behalf of all working people in the province.

Like millions of Ontarians, many of whom are your customers, we were disgusted last week to learn that many Tim Hortons franchise owners had taken steps to claw back paid coffee breaks and reduce health benefits of their minimum wage earners, saying they needed to offset perceived costs associated with the increase in the minimum wage in Ontario.

These actions against minimum wage earners are particularity galling in light of the “Canadian Values” branding that Tim Hortons trades upon. Further, it is perplexing that your franchise owners would take these steps within the first week of operating under the new minimum wage regulations, when a price hike had already been implemented in 2017 by Tim Hortons, in anticipation of the increased minimum wage.

We are aware of the corporate structure at RBI where the parent company, Tim Hortons Corporation, dictates nearly every detail of a franchise-owner’s business practice. We understand that franchise owners must have a net worth of at least $1.5 million to be awarded a franchise. We are also aware that pricing structures are set at the corporate level, and that the parent organization, RBI, has the means and methods to ensure that franchise operators respect the law and follow policies and procedures set forth by the parent corporation.

We agree with your statement that the actions of Tim Hortons franchise owners are indeed “reckless”, and that “Tim Hortons [employees] should never be used to further an agenda or be treated as just an ‘expense.’”  We also agree that this is completely unacceptable, and does not reflect the stated values of your brand.

Until benefits and paid coffee breaks are restored along with previous labour practices, such as the payment of shift premiums for overnight shifts and allowing servers the ability to receive tips instead of forcing workers to remit them to the owner of the franchise – we will be relentless in our efforts to draw attention and will continue to be critical of the predatory labour practices at Tim Hortons Restaurants across Ontario.

Stating your disdain for the actions of “rogue” franchise owners is not enough to resolve this unfortunate situation.

The OFL calls on you, as the Chief Executive Officer of RBI Inc., and as President of the Tim Hortons brand to take immediate and corrective action to ensure Tim Hortons franchise owners respect the spirit of the new labour laws in Ontario, and immediately proceed with the full restoration of wages, paid breaks and benefits to the workers at Tim Hortons restaurants across your entire chain.

Failure to take the required next steps will further escalate this matter within our membership, your customers and the public, and will leave us no other option than to recommend continued actions at Tim Hortons locations across Ontario.

The Labour movement is calling on you to take immediate corrective action instead of simply blaming this situation on the reckless and greedy actions of your franchise owners.