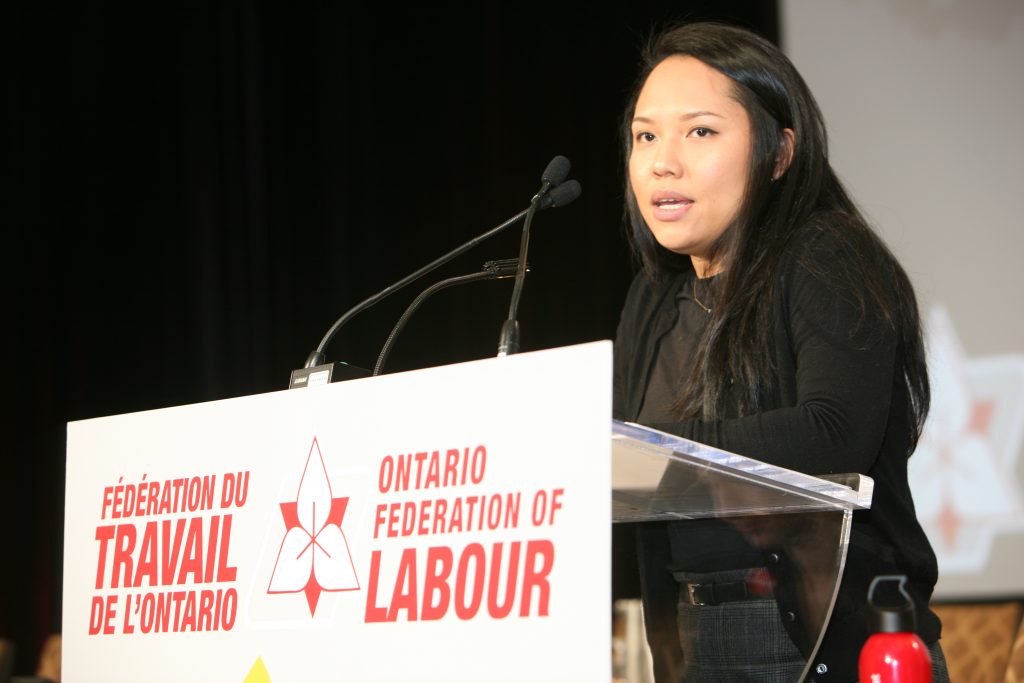 Organizing is no small challenge, and at the OFL Power ON 2017 convention a panel of organizers took the stage to share their experience and knowledge of organizing.

Millions of Canadians say they would be open to joining a union, delegates heard during Tuesday’s panel “Activating our Decent Work Agenda: Hit the Ground Running”.

He urged union leaders to refocus and redouble efforts to reach out and increase union density, raising the number of unionized workers in the province.  Union membership is up in Ontario’s public sector with 7 out of 10 workers currently belonging to a union, but it is down in the private sector which has a density rate of 14.3 %. We must think about what’s possible, he told the delegates at the OFL Power ON 2017 Convention.

Many non-union workers belong to racialized communities, panelist Zenee May Maceda pointed out. Maceda, a national representative at UFCW Canada, told delegates about her family’s experience after they immigrated to Canada. She described growing up in a house constantly full of relatives and friends recently arrived to Canada and staying with her family as they figured out how they would contribute and succeed.

“We all came to work,” she explained.

She participated in organizing after a plant refused to grant permanent employment status to staff who had worked up to two years for the company. It was then that she realized how crucial unions are for families like hers.

As unions become more successful they must continue to engage more broadly, said panelist Pam Frache, Coordinator for the Fight for $15 & Fairness.

“We have to know that more and more workers are going to be standing up and asking to join unions. The questions for us, sisters and brothers, is will we be ready for it?” asked Frache. “Are we going to exist on broader-based bargaining so that smaller workplaces have real union power?”

The challenges are many, conceded panelist Len Elliott, OPSEU, Regional Vice-President. Among those are the changing priorities that can emerge over several years. So long as unions remain committed to their struggles, said Elliott, wins will come – sooner, or later.

The panel was moderated by Roxanne Dubois.