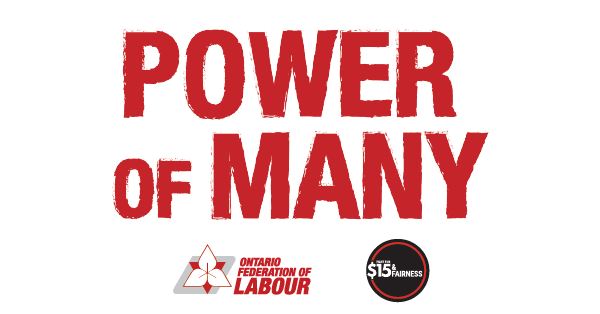 TORONTO, Oct. 16, 2019 – Community and labour leaders began an indefinite occupation of Premier Doug Ford’s constituency office at 823 Albion Road in Etobicoke today, demanding his signature on Section 83(4) of the Workplace Safety and Insurance Act (WSIA) to prevent further workplace deaths in Ontario. To ensure that companies using temp agency workers are held financially responsible for workplace deaths and injuries under WSIB, regulations were drafted in 2018, but still await the Premier’s signature to be implemented.

Today’s occupation comes following the death of Enrico Miranda, the 57 year-old father of two, who was killed on September 25 at Fiera Foods. Miranda was the 5th temporary agency worker to die on the job at Fiera Foods, and the 2nd since Premier Doug Ford took office.

WHAT: A media briefing with community and labour leaders
WHEN: Wednesday, October 16 at 5:00 pm (the occupation has begun, and will continue indefinitely)

WHERE: Doug Ford’s constituency office at 823 Albion Road in Etobicoke

VISUALS: Signs bearing the names of the five temp agency workers who were killed at Fiera Foods, flowers, candles, an oversized poster of Section 83(4) for Premier Doug Ford to sign, community and labour leaders who will share stories of how this issue impacts them.

“Premier Doug Ford has left us with no other choice, but to start this occupation today,” said Chris Buckley, President of the Ontario Federation of Labour. “Had Ford implemented Section 83(4) of WSIA, companies like Fiera Foods would be held fully financially responsible for the injuries to temp agency workers. This tragic death could have been prevented. It is time for companies like Fiera Foods to be held accountable.”

“Legislation already exists to stop companies from treating temp agency workers’ lives as disposable,” says Deena Ladd, Executive Director of the Workers’ Action Centre. “All Premier Ford needs to do is to add his signature so it can be enacted. This is a matter of life and death.”

Last week, the Ontario Federation of Labour, Workers’ Action Centre, Jane Finch Action Against Poverty and Fight for $15 & Fairness issued an open letter to Premier Doug Ford demanding he immediately enact of Section 83 (4) of WSIA. To date, there has been no response.

Ford’s refusal to take action to prevent further workplace deaths in Ontario has provoked this indefinite occupation of his office today, with the support of Unifor, CUPE Ontario, Elementary Teachers of Toronto, Ontario Network of Injured Workers, and the Toronto York Region Labour Council, among other community and labour groups.

The Fight for $15 and Fairness is a growing movement of workers committed to fighting for decent work, and includes anti-poverty activists, health providers, labour groups, students, faculty, and faith leaders.  To learn more, visit: www.15andFairness.org.

The Ontario Federation of Labour advocates for the rights of all workers whether they are in a union or not, and demands a criminal investigation in every workplace death through its Kill a Worker Go to Jail campaign. The OFL represents 54 unions and one million workers in Ontario. For information, visit www.OFL.ca and follow @OFLabour on Facebook and Twitter.