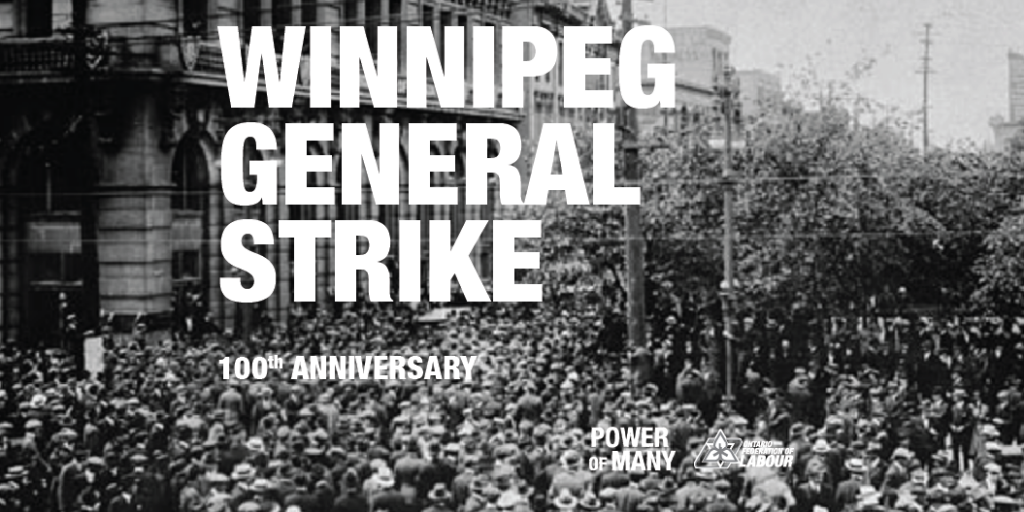 The Ontario Federation of Labour marks the 100th anniversary of the Winnipeg General Strike.

This is a timely and important anniversary for Canada’s Labour movement, and one that has particular resonance in Ontario, where workers are facing a government with priorities that are out of step with what Ontario families need. The Winnipeg general strike is an inspiration for workers in Ontario and beyond, as we continue to defend the right to collective bargaining, better wages, and the improvement our working conditions.

The Winnipeg General Strike took on massive unemployment, poor wages and working conditions after Labour leaders came from across Western Canada to form a single union. After months of negotiations, the metal trades went on strike and the general strike was called on May 15. 30 000 workers walked off the job.

Workers continue to face the same struggles today. In Ontario, the government’s regressive cuts to workers’ rights, reductions in worker protections, an insufficient minimum wage, funding cuts that are leading to job loss, and hiring freezes are well documented.

Here is a short list of cuts to the services that Ontarians cannot do without: paramedic services, supports for children with autism, class sizes that support quality public education, and legal aid.

This June 7 marks one year of cuts. One year of rollbacks of worker rights, and one year with a government with priorities that are out of step with the real needs of Ontario families.

Let the solidarity of workers in Winnipeg 100 years ago inspire us all as we continue to build the resistance to the PC government’s devastating changes in Ontario.

There is a lot at stake in Ontario. On June 7, the Ontario Federation of Labour and people across Ontario are saying “No” to Ford’s cuts with actions across the province, in defence of labour rights and public services including health care and education.

We must not give up the fight.

When we come together, united in solidarity, we win the changes workers need. Across Ontario the Power of Many are ready.

We are the majority.
We are organized.
We are resisting.