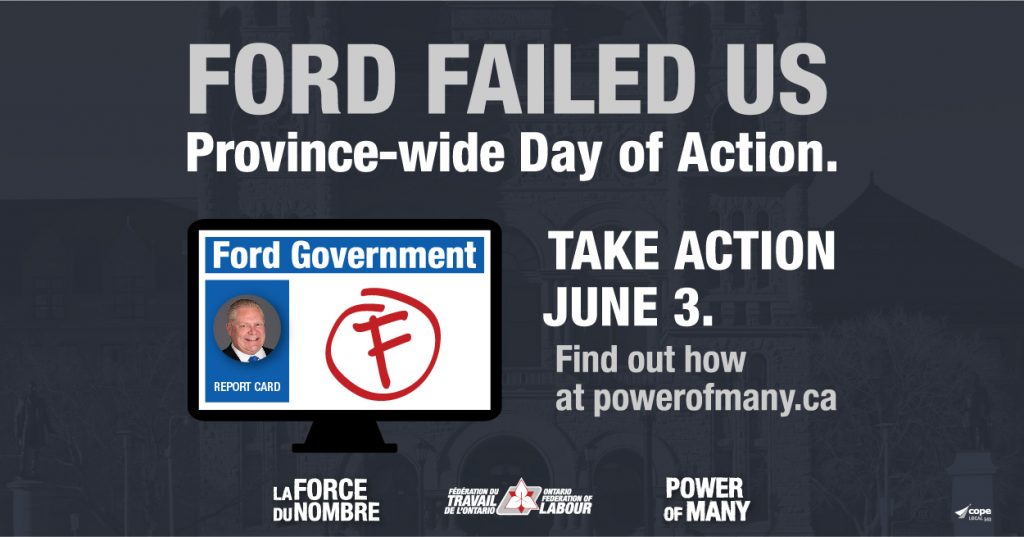 (Toronto) – Ontarians are fed up with the Ford government’s failure to support the working people of Ontario, and they will be telling him so on Wednesday, June 3 with the Ford Failed Us Province-wide Day of Action, says the Ontario Federation of Labour.

From taking action in their communities, to sending a letter to their MPP, to asking questions of the Premier in a People’s Question Period, the workers of Ontario will tell the PCs that they have failed Ontarians.

“Before COVID-19, Ontarians were already feeling the damaging effects of PC government cuts. Now, COVID-19 has revealed to everyone just how much this government has failed all of us,” said Ontario Federation of Labour President Patty Coates. “There is a crisis in long-term care and a shortage of personal protective equipment. Not one worker in Ontario has legislated paid sick days, and the province still has an unlivable minimum wage. There is a deep lack of leadership when it comes to ending racism in this province. It’s time for this government to listen to workers and provide decent work, safe and healthy workplaces and communities, strong public services, and equality and justice. The people of Ontario must come first during this pandemic.”

The labour movement and its allies are calling on the government to fix the crisis in long-term care; prioritize workers’ health and safety; implement the promised pandemic premium pay; expand its eligibility and make it permanent; introduce a livable minimum wage immediately with no exceptions; provide permanent paid sick days plus paid days during an outbreak; respect collective agreements, and listen to workers.

“The PCs cannot miss the onslaught of concern being voiced by Ontarians suffering because of this government’s short-sighted policies,” said OFL Secretary-Treasurer Ahmad Gaied. “Ontarians know that the way we will get through this pandemic is by supporting each other, not by counting on big business to offer direction on government policies and long-term care homes.”

The OFL has provided activists with information on social distance actions they can take to send a strong message safely during the pandemic. The OFL will also launch The People’s Question Period on Twitter where Ontarians will ask the Premier a question about building an Ontario for all with the hashtags #PowerOfMany, #PeoplesQuestionPeriod, and #OnLab.

“The Ford Conservatives have failed Ontario,” said OFL Executive Vice-President Janice Folk-Dawson. “Calling front-line workers heroes but not ensuring they have access to life-saving personal protective equipment shows just exactly what this government thinks of workers. We also know that refusals of unsafe work are being denied by the Ministry of Labour. It’s time this government took workers’ concerns seriously.”

OFL President Patty Coates will be available for media interviews by phone or on Zoom on June 3, 2020.

Visuals include Ford Failed Us and The People’s Question Period posters, tweets and video from @OFLabour, and questions for Premier Ford, which can be searched using #PowerOfMany or #PeoplesQuestionPeriod.